Whenever I get sad or lonely or afraid, I like to think back on the years at home while growing up in Carmel. We were always safe, sheltered (in more ways than one), and surrounded by beauty and sweetness on all sides. Even now, I need only to read the local newspaper to feel that warmth of home again.

My favorite section is the Police log. Seems odd, I know, to find a sense of peace and happiness in the world by reading the significant calls logged by your local police department; nevertheless, when I read stuff like “Caller reported a dollar bill on Ocean Ave,” or “Victim called in a possible break-in after returning to his house to find a window pane was broken. After further inspection, a pine-cone found resting nearby was determined as the culprit. No valuables or property were reported missing,” how can one possibly be sad when such as this goes on in the world? It’s enough to break a stitch from the giggling…

Here are some good ones from this week:

Carmel-by-the-Sea: Report of male selling puppies in the downtown business area (Ocean Avenue). Officer contacted subject and advised him of business license requirements. The subject stopped soliciting the sale of puppies and left the area in his vehicle.

Carmel Valley: Reporting party stated his daughter and her boyfriend were in a heated verbal argument.

Carmel Valley: A supermarket employee reported a customer had her wallet stolen. Before deputies arrived on scene, the customer said she found her wallet in the store.

There are more important things than Football… just not right now.
––Bumper sticker in Berlin

Go on. Try to find a single American sport even halfway commensurate in its ability to draw its citizenry nation-wide into the streets, shouting triumphantly over each and every win, with that quaint form of ball-kicking in Europe known as football (a.k.a. soccer). Simply put, there is nothing like it.

And this year was different. The World Cup in 2006 was perhaps the first to inspire this nationalist sentiment, to persuade the Bavarian, the Schwabian, the Saxon, the Saarlander, and so on, of their German identity above all. This year’s European Championship (EM) bore witness to this effect. It was the first time that the average German across the country draped his windows with the German flag, hooked mini-flags to the doors of his car, and wore the German colors painted on his cheeks to every game.

Of course, they were not the only ones. Our own Swissman was just as bad: the white cross of the Swiss flag was prominently displayed from his window over-looking Blumenstrasse, and every time we went to a public viewing of a Swiss game (at one of Fleur, Potato Island, or the Congress Hall), he carried his mammoth cowbell. I also carried it once, on the handle of my bike on our way to the Saar for the opening of the EM. The sound of it could be heard changing and chiming all through the streets of Saarbrücken as we rode past. 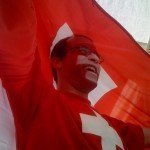 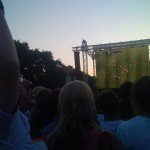 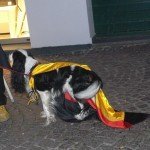 You wouldn’t think it now, but for three long weeks in June, there was no sleeping at night for the sound of honking horns and rabble-rousers shouting down in the streets. If you had the unfortunate luck of bussing it home from the university, you were in for a long ride as celebrating drivers crowded the streets and blocked all routes. Because someone would always win each and every night. The Turkish, the Czechs, the Croatians… not all of them would last each round, but every time a country won a game, their nationals would hit the streets with their horns and flags. From the din, I now know that Turks make up the largest minority population in Saarbrücken.

Nevertheless, I heartily enjoyed watching the (German) games, and often listened in on talk of scores for other countries I supported (Sweden, France, etc). I knew what an amazing experience it could be to be present in the country that won the final game. I was living with my host family in France when they won the EM in 2000, and sadly, I had to go to bed early while the cheering went on in the streets. This time, as luck would have it, we would be attending a linguistic conference in Potsdam, not far from Berlin, and would be in the capital on the night of the final game.

And as luck would have it again, Germany made it to the final round and was to play against Spain. We therefore decided to watch the game in a Spanish cafe somewhere in Berlin. Well, what can I say? The ride was fun, but the destination left much to be desired. Spain won, and deservingly. And I’ll have another two years before the next opportunity.

So it looks like I was mistaken and my brother will be stationed in the City of Mosques for the time being. The time difference is only an hour ahead from where I am, so this works out quite nicely as his new work schedule will be the morning shift from 4am to 12pm, with the rest of the day left to himself. According to him, his job will consist of checking convoys leaving and returning to the base so as to prevent friendly fire (cause it’s so easy to start shooting at something that looks armed).

While sitting in my kitchen, we got a nice video tour of his new place: apart from the bunk-beds in military decor, it’s like his own hotel room, complete with mini-fridge, television, Wi-Fi (albeit for $75/mo), air conditioning, and a window with blinds overlooking we’re not sure what yet (the sun drenched the view to the webcam). The local currency among the marines on the base are pogs and apparently there’s no need for him to venture into the city for chocolate; he can get what he needs from the PX on base.

Still, if he ever did need to go amongst the Iraqis, the marines are given a card with important gestures to remember when communicating with the locals. Here are a few of them:

The most surprising news from him was that this entire base is supposed to be shut down completely within a few months, with everyone being transferred to other bases. Only 4 men killed within the past year (possibly only from accidents)… Okay, perhaps this is not surprising considering the various sieges since 2003 – what’s left to pose a threat? Well, let’s hope for successful reconstruction.

Last Friday, I happened to catch my brother online as he was waiting out his layover in Leipzig, Germany with the rest of his unit on their way to Iraq. If he had been in Frankfurt, I would have hopped on a train immediately to meet him, if only for a few minutes; as it was, we managed a conference call over skype between Michael, myself in Saarbrücken, my parents in Los Angeles, and his wife Jen (on her iPhone) on the road from Arizona to Texas. Ask me why I love technology.

This morning I caught him online again, this time in Fallujah, still waiting to make the remaining hour-long trip into Baghdad. Internet access, which cost him $10/hr in Leipzig, appeared to be free for him on a shared terminal, or $5/hr using his own laptop and a satellite connection. He’s promised to send me pictures as soon as he gets his camera working. All those troops of yesteryear who waited weeks or months to get letters from their families while fighting overseas, and we get video conferencing whenever he plugs in. Ask me again why I love technology.

It was my mother’s idea, but my little brother’s such a big softy that I know he’ll appreciate it. If you see me wearing red on Fridays, it’s not that I’m living with HIV/Aids, or that I’m saying ‘No to Drugs’, or that I am protesting the war, or making any kind of political statement whatsoever. I’m wearing red on Fridays as a token of faith and support for my brother, until he comes home safely to his wife and family.