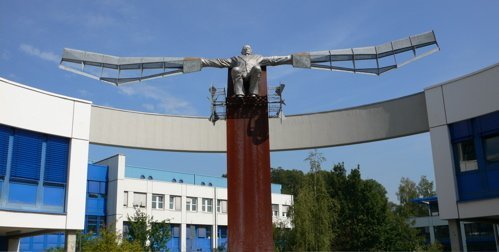 Tuesday, and I have had quite a day. I ended up stealing the rest of a roll of toilet paper from the Mensa and borrowing a bottle of shampoo and a small towel from Michael, one of my future housemates. I met a ton of people, including a flock of French girls, and I feel as if all my senses were stimulated again with all the flutter of winds from other lands. My primary goal at the moment, however, is to get a bed for my room and move out of the dorms pronto. Homesick though, I cried myself to sleep.

So after all the stress, the waiting, the worries, and the running around, I have finally made it to Saarbrücken.

It was an uneventful flight, but just as I started to feel as if everything would go smoothly and all would be well, I arrived on campus. As my flight arrived late and I had tooled around a bit in Frankfurt, I did not arrive until close to 6pm. I was not expecting to have to dive into the German language so abruptly, but as the organizers were insistent upon speaking it, all of the instructions and information for the courses and dorm rooms were thus communicated. It was a painfully long process.

Still, it wasn’t until I finally made it to my room that the whole horror hit me. There I was in my room with no sheets, no towel, no shampoo or soap or toilet paper, waiting for our resident assistant (an algerien who tended to speak a colorful mix of french and german) to show up and explain how to use the shower. He never did show and, horror of horrors, stores in Germany close at 8pm. This is, of course, an advancement in progress for the Saarlandish, as it was not more than two years before when stores closed at 5pm or 6.

In any case, hot, tired, and hungry, I finally managed to receive bed sheets and a pillow, and settled down into a troubled sleep in which I constantly bashed my knee into the radiator and dreamt longingly of home.

This is my first post. Everyone put on their seat-belts and hold hands…let’s just try to make it through alive.