Semantic Theory, Thursday morning. Prof. Pinkal is up at the board explaining how linguists seek unicorns and how difficult this is for semanticians.

The class bursts into laughter as I blush, hide my face, and giggle.

It just wouldn’t be the same without Akira.

Yesterday I was pulled over by the German police in downtown Saarbrücken.

Who knew that you can’t run a red light while riding a bike in a three-way intersection? If there is no road to the right, I have always assumed that the traffic light simply does not apply to me, and have always gone through it. Regrettably, I did this right in front of the coppers who immediately drove up and pulled into the shoulder ahead of me.

So I did what every foreigner would do in such a situation:
pretended not to understand German.

In the end, they made a big deal about the 25€ ticket for such an infraction, but I think they were just trying to prove a point. After all, I ran the light right in front of them; they couldn’t just drive away without saying anything. I was actually prepared to take the ticket, but instead they said only, “Not today. Today is just a warning,” looked sternly at me, got back in their little green car, and drove off.

Another thing I learned from this incident is that you can only make a right turn on a red light if there is a special arrow indicating that you may do so. This also applies to bikes apparently. However, as in the case of crossing the street (by foot) on a red light, I was told you can simply hop up onto the sidewalk, turn the corner, hop down again and all will be well. In some ways, this reminds me of the French ‘D’ mentality.

In the U.S., it is completely the opposite. You can make a right turn on a red light (assuming you stop first), unless there is a sign specifically stating that you can’t. On the other hand, they will pull you over if you’re under eighteen and not wearing a helmet. 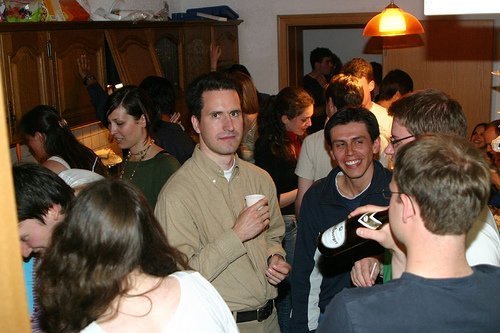 For Cinco de Mayo, I decided to host a Mexican shin-dig at our flat to usher in the new semester. I think the turn-out was much more impressive this time than at Christmas.

Perhaps it was the lure of piña coladas and tequila sunrise. Possibly it was the promise of home-made hot corn tortillas for tacos and tostadas. Certainly the cinnamon sopapillas dribbled with honey would do it.

It was rather impressive pulling off a big dinner like that for so many people. The Mexicanische Abend was originally supposed to take place shortly after the new semester started; but since not everyone had quite returned and settled into their new classes, even after the first three or four weeks, we postponed it until the 5th of May as a good way to justify our need for a party. This also meant, however, that school and work and deadlines took precedence over party planning, so it was not until Saturday afternoon that the ball started rolling.

Two hours in Globus and a quick jaunt to Karstadt later, I was in the kitchen preparing dough for two kinds of tortillas and hoping I hadn’t forgotten anything at the store. I’ve never made tortillas before. If I had been in my right mind, I would have made them the day before, or at least several hours before people came. That, unfortunately, was not the case. Still, a gaggle of friends showed up at seven, exactly one hour before the party was supposed to start, and I immediately put them to work. The kitchen was suddenly full of people dicing, slicing, grilling and baking, until everything was magically prepared and ready for the masses.

Except for the tortillas, of course.

Has anyone actually tried making tortillas in a kitchen full of hungry grad students all clamouring to get started? Probably not. Because they know better. Luckily I had store-bought taco shells around to tide them over, because the tortillas turned out to be too thick and too hard to actually roll up all the good stuff we had laid out. I then remembered how my favorite Mexican place had a professional steamer to soften the tortillas after they were cooked. So I pulled out our big pasta pot and the broccoli steamer and there we were…

I ended up rolling tortillas and handing them over to be grilled until about midnight. I actually got pretty good towards the end, as I figured out how to use a glass dish to press the balls of dough flat and thin in a perfect circle. By that time, however, most of the lightweights were already saying goodbye and the crowd was thinning out. For me, that was when the real party started.

There is something so cool about having a whole house open and free with people you like all around and the knowledge that you are going to stay up all night with them. With more room in the kitchen, we danced to cheesy pop songs and sang at the top of our lungs. In one bedroom, we read German poetry (really); in another, there were lively discussions on gay lifestyles; and in still another, we danced salsa and tango.

By five in the morning, we could hear birds chirping and feel the sky turn a faint pink. The die-hards then decided to head out to the schloss (castle) along the Saar and watch the sunrise. I think they also went to a cafe in town for breakfast before teetering off to their respective beds, around 11. As for myself, I snuggled up in bed, flushed with the success of having thrown another great party, and confident that I would not be cleaning up the mess..

Many thanks to Matthias Bauer for taking such awesome pictures. You can see more of them here.

Did you know you can swap the value of two variables without temp??

I wish I were so clever as to come up with that on my own. Still, I post it here to spark the imagination of those who find it as fascinating as I.

This morning I woke up to a low, grey sky that huffed and puffed and pouted all throughout the day, until it finally broke into a torrent of steamy rain drops just as I ventured out to take the bus home. Lucky that I did not ride my bike this morning.

It turns out, however, that the lack of April showers succeeded in bringing no May flowers, which in Germany means barley and wheat. The unseasonably warm Spring has been bad for crops, driving up the price of beer, their most darling commodity. Conversely, it drove hordes of Germans out to the biergartens to consume it.

I guess a little rain never hurt anyone.

..weakly equivalent to the K-Nearest Neighborhood

Actually, it has come to our attention that it is rather difficult for some to refer to our flat seeing as the name changes every month. And of course, what is there to say about the more elaborate names (i.e. the For-all-x flat during April) we’ve picked? How is one to keep up?

I assure you that we will take your opinions into consideration; however, we intend to continue amazing you with our geeky linguistic minds every month. So stay tuned, and get with it!

The night before Labor Day is Witches Night in Germany. We certainly had our share of them. All along the streets, cars had been TPed, and adorned with stunning modern art, typically of the ketchup and k-y jelly variety.

And last night I could hear the labor day tension brewing outside my window as a mob of drunken German men gathered in the streets. They started bellowing and shoving each other around, so I had to peek my head out the window to see what it was about. It was incredible: big-bellied men, hollering and pushing each other around as if they were ten years old.

Soon I got a bit frightened: two guys finally started slugging it out on the hood of someone’s car, trying to strangle each other and yank out the other’s hair. I was so afraid of someone pulling out a knife. Cars driving up stopped and tried to back up and take another route. Eventually the mob made it to the sidewalk outside another bar, bashing one guy up against the cigarette vending box. The guy fell to the floor while the others stood around kicking him. Then, just as suddenly as they had gathered, they got bored and wandered off to their respective bars.

It was one of those times that it is good to know the equivalent of 911 in the country where you live. Of course, had I even known that at the time, I would never have been able to explain what was happening outside my window, let alone understand their questions over the phone in German. The police did eventually show up, but by that time, everyone was gone, except the guy on the ground of course.

Still, it was fascinating how people would just walk by, unconcerned for their safety, during such a ruckus. The same thing actually happened last Friday night after we packed up our schwenker to go home. We had to pass by a big mob of dark-haired boys (Turkish? Algerian?), some of whom were shoving each other, others who were trying to hold the shovers back. We walked right through them, but they paid us no attention. It struck me as very Fight Club.

The Algorithm is From Jersey

I started this post sometime back, but never finished it. It was supposed to begin with: “Puerto Rico is a surprisingly interesting place..”

But since I was only there for a full two days, I do not feel qualified to remark on the people or the culture. Still, I learned a few things:

They also have these funny bananas that taste like potatoes. And they invented the Piña Colada, which is something.