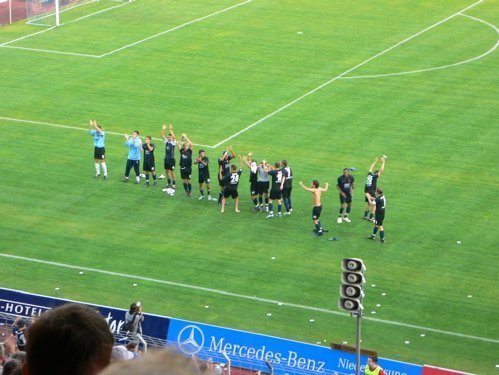 I went to my very first live football game last Sunday. Saarbrücken, a third league team (blue and black), played against Mainz, a first league team (red and white), and won the game 1-0. It was thrilling. I knew better to keep my eyes on the ball or I’d miss the goal, and when it came, I was not disappointed. So this means little SB will make it to the next round for the German cup.

So what is a German football game experience you ask? 15,000 people were in that stadium, and as there are no parking garages or whatnot, their cars were doubly lined along the sidewalk and the right lane of the road for miles on end. There was also a barricade of German polizei, not sure why. No commentator for the field (they just assume people know what’s going on), and they drink beer or coke with these long sausages wrapped in a small round bread roll. Fascinating.

One thought on “Rot, Weiße, Scheiße!”